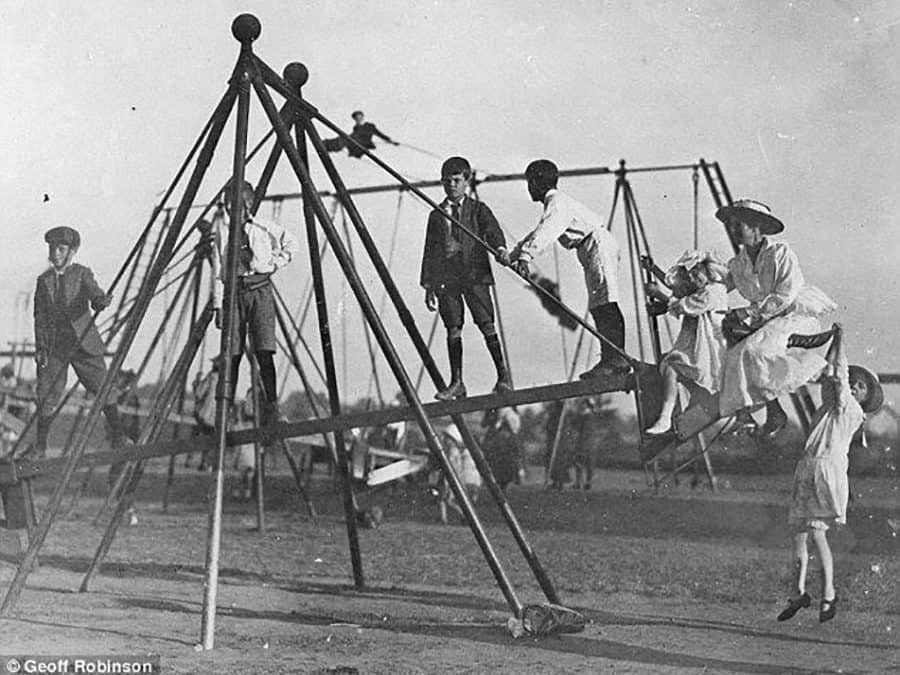 Playgrounds have been around in the United States for more than 130 years, and throughout the years, they have changed significantly (for the better).

From materials to safety precautions and child development considerations, here are some ways that American playgrounds have evolved over the years to captivate new generations of children.

Playgrounds originated in 1885 in Germany and were introduced by philosopher and educator Friedrich Fröbel, who also came up with the concept for kindergarten.

Psychologists and educators in America soon saw the value of Fröbel’s ideas to foster healthy development in children, and the first “playgrounds” in the United States appeared in the 1880s.

To be honest, these “playgrounds” were little more than boxes of sand in lots adjacent to multi-family dwellings. They were also fairly rare for a while. Seeing one in your neighborhood back then was a lucky treat!

As large metropolitan areas developed, city planners saw the value of adding free playgrounds in order to keep kids off the streets and to develop their physical health and socialization skills.

The Rise of the Modern Playground 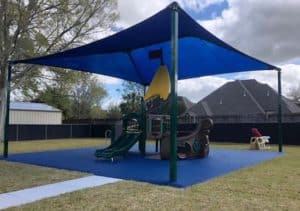 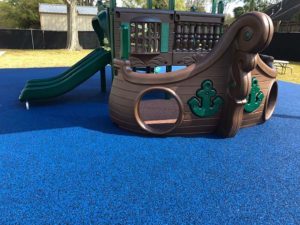 Playgrounds remained uncommon in public spaces until the turn of the 20th century. In the early 1900s, The Playground Association of America was formed to help guide the construction, layout, and conduct of playgrounds. Early playgrounds often had “boys” or “girls” sections, as well as instructions to guide children in organized activities.

Today’s parents and city planners understand the value of having a playground nearby to encourage exercise, imaginative play, and physical and mental stimulation. We also know the importance for children to direct their own play. Odds are you now have a playground within a few blocks of your home that is regularly used by all the children in the neighborhood.

The Road to Safer Construction

In the 1950s and 1960s, it was even common to refurbish ‘old’ items such as rusted-out automobiles, discarded industrial scaffolding, etc. for constructing playgrounds.

Doesn’t sound all that safe, does it?

Gradually, the materials and construction of playgrounds changed with advances in technology and science. Metal gave way to wood, which then gave way to plastic. Today’s playground equipment features molded plastic and composite materials that are not only safer but also retain structural integrity when exposed to the elements of hot summers and cold winters. 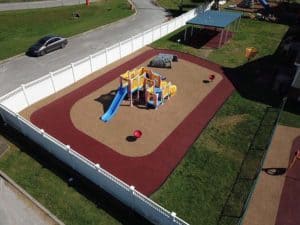 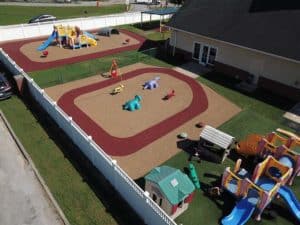 Of course, you will still find modified versions of old favorites like chain swings and metal slides, but they are modified to be safer for children to use, meaning fewer burned hands, fewer cuts from sharp edges, and fewer splinters.

A Shift to Mental Development

The first playgrounds encouraged children to use their imaginations. They imaginatively built cities, roads, bridges, and dams. Children were also encouraged to play strategy games with each other like tag, red rover, and hide-n-seek.

Once physical structures were introduced, playgrounds become more focused on physical play (running, jumping, and sliding). As equipment became more popular, the purpose of playgrounds shifted to the development of gross motor skills, agility, and encouragement of physical activity for healthier bodies.

Recent years have seen a return of playground games that help children use focus on mental and physical development; games like tic-tac-toe, four square, mazes, and hide and seek are being implemented in playground design. Modern playgrounds help children use their reasoning skills, providing a place for them to interact with peers to develop physical, social, emotional, and cognitive skills. These days we understand that outdoor play on playgrounds or unstructured play with other children helps children with motor skills, balance, problem-solving skills, social skills, self-esteem, and more.

Playground planners are not neglecting the physical aspect, however. They are also including more features that use finer motor skills, such as rock climbing walls, balance beams, and rope ladders. The final product is a playground that fosters a more complete sense of health and well-being.

The Rise of ‘Risk Aversion’

The association of risk of injury as it relates to playgrounds saw a rise in the 1970s and 1980s. By the 1990s, programs were formed focusing on the “risk” of playground injuries from unsafe surfaces. Along with an increase in injury-related lawsuits, many city planners wanted to find ways to make playgrounds “risk-proof.”

Of course, many children’s activities present some risk of injury or accident. Although considered “safer” by many parents, sports like swimming and soccer actually have a higher risk of injury over playing on a playground.

New studies show that risk-averse parenting, educating, and even playground development might not be best for children. Keeping kids home or inside in the hope of keeping them “safe” is part of the rise of childhood obesity and childhood diabetes. Indoor activities such as television, video games, and other technological advancements also contribute to the desocialization of children. The need to protect our children by keeping them indoors may be contributing to not only a decrease in physical development but also the mental development needed to become successful adults.

Playgrounds really are a necessity when it comes to our children’s health. Playing outside is healthy, helps kids develop mentally and physically, and can set them up for healthy habits as they become adults. If you think back on your own childhood, likely many of your memories and development stem from your time on the playground.

The call to increase safety on playgrounds has been heard since they first became commonplace. Over time, the materials and designs of playgrounds have changed dramatically in order to make them safer—from pea gravel to bark mulch to products like rubber tiles, bonded rubber mulch, and poured-in-place rubber surface. Today, playing on a playground with a rubber surface is a comparatively safe outdoor activity. The real question is about finding the right balance between playground safety and fun. 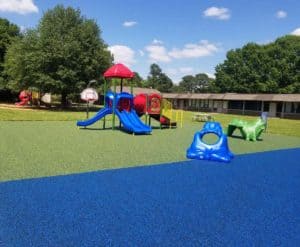 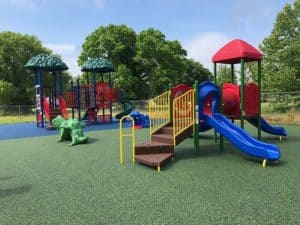 One very noticeable change in playground construction is the various types of materials used for fall protection. The first play structures erected were on hard ground such as soil or blacktops, but soon planners realized that some type of material was needed to absorb the impact of falls or landings.

Sand was one of the first materials used, as it was affordable and readily available. But soon planners realized that wet sand can be just as hard. Something safer was needed!

“Loose fill” materials such as wood chips and pea gravel became common surfacing choice. They protected children with varying degrees of success, but still pose problems such as splinters or children placing the gravel in their mouths, noses, and ears. Also, as playgrounds strive to be more inclusive to children and adults with mobility restrictions, playgrounds have evolved to use yielding, yet firm materials that are less likely to splinter, less likely to be loose for consumption, and more easily accessible by wheelchairs and mobility devices including bonded rubber, rubber tiles and poured rubber surface.

Many playgrounds now use rubber safety surfacing to absorb impact and prevent injury. Rubber-surfaced playgrounds offer the best of both worlds: fun and safety. This generates some peace of mind for parents. The result is a playground that is more in tune with the needs of children of all abilities. 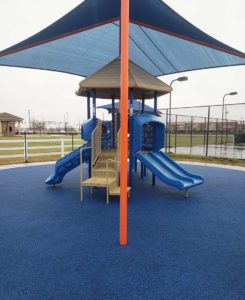 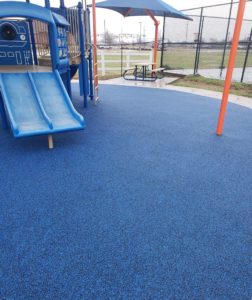 What’s next for Playgrounds?

Don’t let playgrounds become relics simply for the sake of preventing a (statistically low) injury. Encourage safe play and get involved with the community to discuss the use of safe surfaces such as No Fault Safety Surface, No Fault Safety Tiles and No Fault Rubber Mulch.

For more information on our best-in-class safety surfacing products, please check out our website. Or contact No Fault today to learn what’s in store for the playgrounds of tomorrow. Perhaps we can help you with your next project!